(a potted (or bottled) history of our exploits)

If you’ve been brave enough to log on to our website, I guess you are familiar with Heybridge Basin’s infamous ladies (a word used rather loosely I fear) rowing team, The Basin Oars.

We are most commonly spotted rowing noisily up & down the canal in our tasteful pink dinghy, or sitting in it drinking wine & plotting tactics, (well, that’s our excuse)!

Our story started back in 1990 when five local ladies, Jill, Jane, Julia, Eva & Viv decided to do something for others that involved taking some exercise. Not wishing to overdo things at the start, rowing was suggested as it could be done sitting down, something that appealed mightily to Jane!

Jill’s husband Peter offered the use of his very nice dinghy called Rafferty, & the girls begged, borrowed and stole a mismatched selection of oars. A large bottle of wine was purchased, and it was decided that if they could row to the first canal bridge, they could drink it.

Much to everyone’s surprise, they did; (row that is, not drink), and over the rapidly diminishing bottle it was mutually agreed that they would enter the Maldon Little Ship Club’s sponsored rowing race in aid of the RNLI, due to be held on New Years day 1991. As there was a fancy dress class the girls decided to wear thermals, basques, stockings & wellies! Someone commented that they would look like a right load of old ‘oars’, and the name was born. 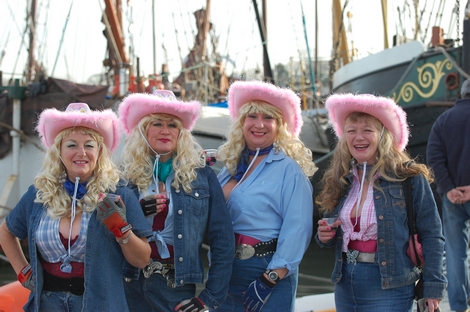 The princely sum of £1,300 was raised by various means, which meant that the girls won The Panther Trophy, awarded to the boat that raised the most amount of money. They also won their race, and the fancy dress prize.

The following year Patti & Chrys joined the team as Viv & Eva had left The Basin for pastures new. We took part in that years rowing race dressed in more subtle gear, namely tight black leggings and tops, whips, chains and multicolour afro wigs. Once again we won the trophy with £1,500 raised, our race and the fancy dress.

As our rowing had improved by now and we had purchased oars that were all the same length, we decided to have a go at The Piers Race, rowing seven miles between Clacton & Walton Piers. By this time the boat needed painting first, so we called a “bawd” meeting.

Over several bottles of wine we giggled and voted to paint it fluorescent pink as some paint had been offered, but were too scared to tell Peter. Luckily for us he saw the funny side of it, and proceeded to customize his boat for us, thus ruining what had once been a very nice sailing dingy but creating a really good safe boat for the team. 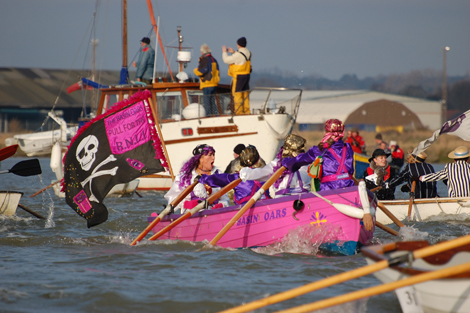 It was a hard row on the day, fighting wind over tide, but we had terrific support from our menfolk, especially Peter, and Jane’s husband Derek. They not only acted as our own personal rescue boat for the day, but actually towed the (very very pink) dingy to Clacton and back for us. They both acted as our “roadies” for years, sorting out and maintaining the boat, making sure we always got home in one piece no matter how much training juice (port and brandy) we consumed.

That year, Basin teams took five of the seven prizes on the day, which is a pretty amazing achievement for a small community like ours; we managed to win the ladies multiple class and cross the line as fifth boat home.

We did the Piers race for three years in succession until other summer activities took over, then decided to concentrate on the Little Ship Club race in future.

After we had painted the boat pink it was unanimously agreed that our fancy dress for that year would have to be Pink Pussycats. We must have looked like a pink nightmare as our homemade costumes were the same colour as the boat, we lit up the river with a ghastly glow as we rowed.

Over the years people have often asked us how we manage to keep thinking up new fancy dress themes, but we have often found that one costume gives ideas for others. Half the fun is meeting at Marion’s house to make our latest costume, fueled with copious quantities of plonk! (I reckon we let Marion & Brenda in the team because they are both dressmakers & Marion has a huge kitchen).

Since that first year, some of the many costumes have included Fairies wot fell off the Christmas tree, with names like Fairy Snow, Fairy Cake & Fairy nuff, Nora Batty’s complete with wrinkled stockings, Stripping nuns (when we got in the boat that year we announced “it’s our day off”! & stripped off our habits to reveal basques, stockings & suspenders), Hareem Girls, Tiller Girls, (a costume that made visits to the loo an impossible dream), Millenium Babies complete with real babies bottles full of port & brandy, French Maids, Carmen Miranda’s, with knitted fruit on our turbans, Saloon Bar Girls (we’ve never rowed with so little on before), Cleopatra’s, with rubber asps & most recently, “The Dolly Parton Appreciation Society”.

We are constantly looking for ways to raise sponsorship money, as we now take part in our local Row4A Reason race around Northy Island. To do this we organize a sponsored dog walk from Goldhanger to The Basin every year, Oars & Paws Fun Dog Show, and a stall at the Maldon Victorian Evenings every year, where we sell hot drinks, home made cakes, mince pies & fudge. We all muster in Marion’s kitchen for the annual mince pie baking. We have worked out over the years that it takes five Basin Oars five bottles of wine to make 120 mince pies!

The Oars have always been an organic entity, with people coming and going. Lynn joined us for a season after Julia retired, (I must point out that there’s no such thing as an ex-oar, we’re like the Mafia, once in, never out), Eve rowed with us for several years, Brenda joined us about three years ago when Patti was unable to row for a while, our most recent member Floss (Kate) put up with us for a couple of years before wisely deciding to leave the old girls to it! 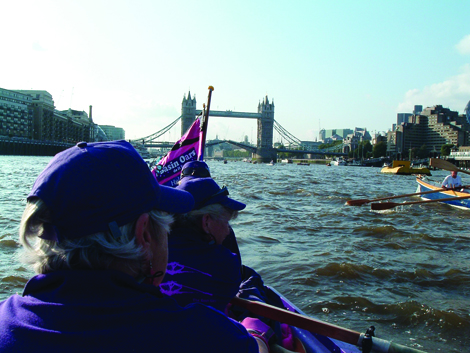 One thing we are always aware of and extremely grateful for is the continued support and encouragement we receive from the people of The Basin. Over the years they have put up with us rattling collecting buckets at them in the pubs, knocking on their doors at Christmas threatening to sing carols unless they pay us to go away and being noisy and outrageous on race days having consumed too much port and brandy. They have also amazed us with their generosity and big sponsorship cheques year after year: with the help of this amazing community we have since 1990 raised somewhere in the region of £80,000 for the various charities we row for, namely the RNLI, Helen Rollaton Heal Cancer, Guide Dogs for the Blind, Alzheimer’s Society, Cardiomyopothy, British Heart Foundation, and various hospices.

We will continue to row our socks off for The Basin and the charities, having made plans to have slots fitted in the side of the boat for our zimmer frames, a crane to lift us in and out of the boat when we get too old, so heartfelt thanks to all our supporters past present and future.

The team now consists of Jill, Marion, Brenda & Chrys, and we are currently in training to fulfill a long held ambition and take part in The Great River Race, a 22 mile race down the River Thames on September 13th. The Row4A Reason Race on August 30th should help set us up.

Watch this space for updates.

A Time To Remember…

A note about our Jane

Sadly, in the early hours of April 1st 2003 Jane finally lost her long fight with cancer, leaving a little bit of herself in the hearts of all who knew & loved her. She was a one off! No one who ever knew her could ever forget her earrings, strong opinions, support of the underdog & wonderful sense of humour, not to mention that deep infectious chuckle that seemed to come from her boots, (bright or flowery of course). Whenever there was any sort of “do” in or around The Basin, Jane would be there wearing floaty hippy outfits that were unique to her, and dancing in her wonderfully abandoned 60’s way.

I can see her sitting at the bar of The Old Ship having one of her heated debates with Mac, usually about politics as Jane was staunchly left wing & Mac slightly to the right of Genghis Khan! I also see her sitting on the sea wall in the summer wearing her “peg bags”, (a pair of flowery plimsolls), topping up her wine glass with her own bottle while Derek threw sticks into the river for their dog Toby to retrieve.

When we discussed fancy dress costumes for various rowing races, Jane would always insist that we didn’t wear anything that made us look silly, slightly forgetting the fact that looking silly has always been our trademark!

When she got too ill to row she took over as Cox, & when that became too much, our wine carrier & coach.

She never lost her strong sense of humour, & her inner strength was an inspiration to the end. Her family lost a devoted wife, mother & grandmother, & we lost our team mate & much loved friend.

A Farewell to Patti – Unforgettable Team Member Patti Mead – who lost her 10 year battle with cancer on April 5th 2010.

Patti was someone who took life by the scruff of the neck and ran with it as far and as fast as she could.

Always laughing, fun to be with but dangerous to have a ‘quick’ drink with. We’ve shared the of best times and worst hangovers in Patti’s lovely company. At her funeral the vicar wondered what she would say at seeing so many people in the church. Marion muttered, “she’d say, ‘red or white?’“, for Patti was always the perfect hostess.

When Patti first joined the Basin Oars in 1991 she held a high flying job with ECC, and was an influential member of the team, always concocting ‘cunning plans’ for raising money or for saucy costumes.

One race we did around Northey Island in evening dress and tiaras, Patti’s doctor had banned her from rowing, so she was coxing. As soon as we were out of sight of race spectators, she announced she was rowing, left the tiller, clambered over all the rowers to the front of the dinghy where she had stashed her oars and then rowed and sang vigorously for the rest of the race, which was about 4 miles (see picture below).

When the chemotherapy caused her hair to fall out she wore a wig which, in typical Patti fashion, she named Jessica. She said that when she played golf Jessica had a better handicap than her. This coming from someone who had once been complimented on her golf swing by none other than Sean?Connery!

Patti we were lucky to know and love you – you are truly ‘unforgettable’. 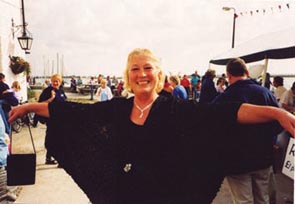 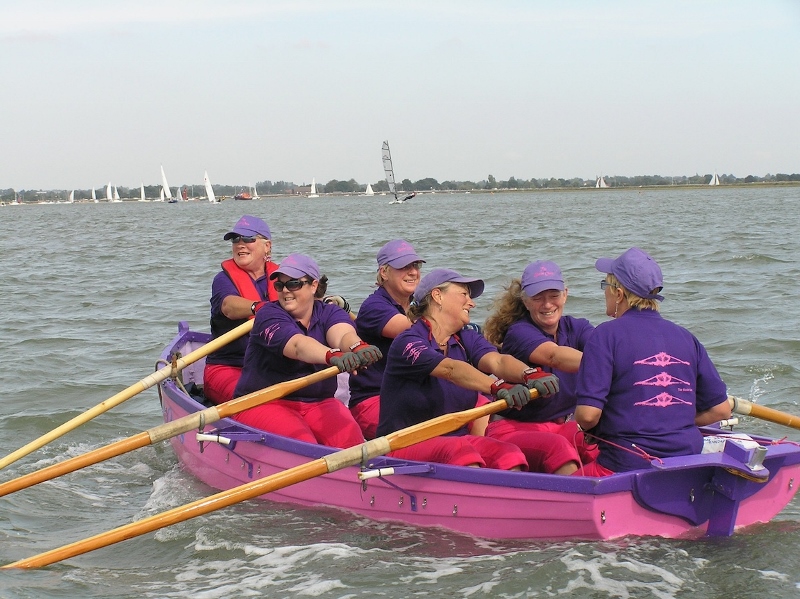 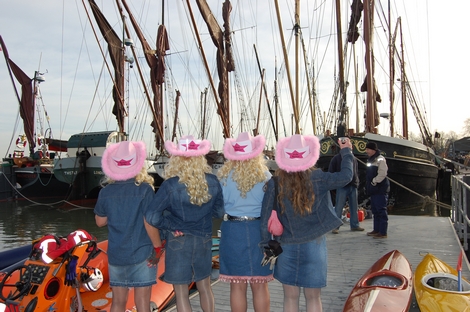