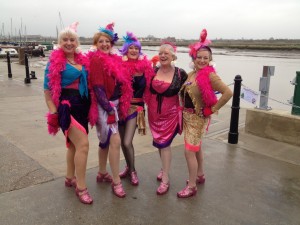 ‘Strictly’ before the race

Thanks to everyone who came along to Maldon Hythe Quay on Sunday 27th December to support this event and to cheer us on.

Fortunately, the strong winds we had been experiencing recently, abated for the race and it was a fairly smooth course. There was a great atmosphere being with so many rowing boats, kayaks, gigs and a paddle board on the water and to see so many spectators along the quay.

As usual we made a colourful splash with our ‘Strictly’ theme. Thanks to the support from the members of our RNLI 200 Club we handed over £3,750 and won the trophy for the boat which  raised the most sponsorship. We were the first women’s multiple crew to finish and were runners’ up in the fancy dress competition.

It was heartening to see so many people supporting this race and we’d like to thank John and Diana Rogers from the Maldon Little Ship Club for organising it and all those who helped make the event so successful.

We’re also grateful to the West Mersea lifeboat crew who came along in ‘Just George’. We couldn’t resist the invitation to pose on the life boat – after all we did help to fund it! 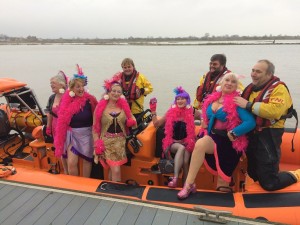